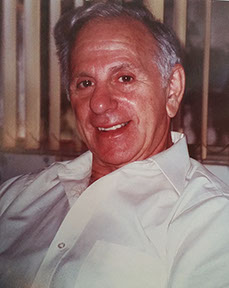 Sherman Harris was born on October 24, 1923 in Superior, Wisconsin. He joined the army at the age of 18 and fought in 5 major battles, including the Battle of the Bulge. Sherman returned home in 1946 on the Queen Mary with a German shepherd puppy, rescued and hidden in his duffel bag.

Sherman and his family moved to Palm Springs, California in 1953. His friend Al Laury needed help in his restaurant, Laury’s Steak Ranch. Sherman worked as a cook, Laury’s and there originated “early bird dinners” in 1954.

Twenty five years later, Sherman had 5 restaurants/delicatessens of his own in the Palm Springs area. His first deli was located in Palm Springs across from the Spa Hotel. His restaurants became a tradition and favorite hangout for locals and more than a few celebrities, including Frank Sinatra, Red Skelton, Zsa Zsa Gabor, Bob Hope, Rite Hayworth and Keely Smith.

In addition to the delis, Sherman handled all of the concessions, including two gift shops and the Alpine restaurant for 33 years at the Palm Springs Ariel Tramway.

Sherman served on the board of directors for the Stroke Recovery Center in Palm Springs. In addition he designed the kitchen and dining areas, spending weeks driving all over southern California to find restaurant equipment the center needed which he would buy and donate.

Another of Sherman’s favorite charities was Living Free Animal Sanctuary in Mountain Center. He donated a van, which became known as “Sherman’s Tank”. He was a major contributor to kidney research because his son, Charles, required dialysis for years.

On his 75th birthday, family, friends and restaurant devotees gathered to celebrate Sherman’s contributions to the community with the unveiling of a star on the Palm Springs Walk of Stars on Palm Canyon Drive.

Sherman Harris passed away on October 2, 2008, at the age of 84, due to complications from Alzheimer’s. His generosity has been continued by his children, who participate and help sponsor the “Walk to End Alzheimer’s yearly.

Sherman’s Deli and Bakery in Palm Springs and Palm Desert are thriving under the care of Sherman’s children: Sam Harris and Janet Harris. They have carried on Sherman’s legacy of great food and great customer service.